Why was Pepe in Chile?

I served as a missionary for the Church of Jesus Christ of Latter-day Saints. 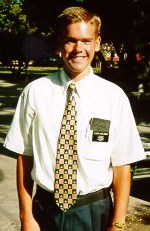 At the age of 19, I volunteered to serve the Lord and spread the message of his gospel to my brothers and sisters. When I agreed to serve, I didn’t know where I would be going.

There are missionaries from our church in countries all over the world. I received my call to serve in Santiago, Chile.

All missionaries that serve missions for the church go to a missionary training center (MTC). There I spent two months learning Spanish and the message that we share with people we meet.

After my time in the MTC, I and the others in my group flew down to Santiago. Missionaries work in companionships of two and work all day teaching the gospel to others. We dress in shirts and ties and often can be seen riding around on our bikes.

I decided to serve a mission because I know that this church is true and that the message that we bring is one of happiness. I encourage you to find out more about the church by visiting the church’s official web site.

I served in the Chile Santiago South Mission. This mission covered most of south-central Santiago and went south to the end of the metropolitan region. Our church divides up congregations geographically which are known as “wards” or “branches.” Several of these units are encompassed by a “stake.” I served in the following areas:

See more details on the places I lived and visited:

Pepe is the Spanish equivalent of Joe. Many Chileans had a hard time pronouncing my last name (the ‘w’ gave them problems) and so they called me Pepe.

After returning from Chile, I studied at Brigham Young University. I graduated with a degree in Computer Engineering and a minor in Spanish. I currently live in Texas and run my own online business including Dad’s Guide to Twins.