The Barros Luco sandwich is one of Chile’s many famous sandwiches. After all, Chileans do love a great sandwich. 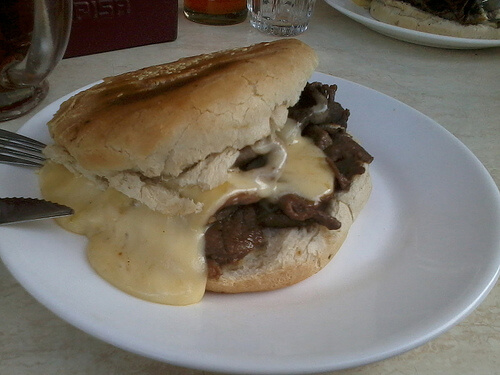 What Is the Barros Luco Sandwich?

The Barros Luco is a Chilean beef sandwich. Basically, it consists of slices of steak with a generous serving of melted cheese stuck between bread. The sandwich is served warm with the cheese melted.
However, the art of making a great Barros Luco sandwich varies based on where you eat it. Yes, you could make your own grilled cheese sandwich and add some meat. However, this wouldn’t be true to form and not what you’d likely get in Chile.
In Chile, your Barros Luco sandwich will likely come on pan frica a sizable roll of bread that has been toasted a little on the grill to give it some crunch.
The steak will be thinly sliced beef that has been seasoned to bring out a rich flavor.
This sandwich has no vegetables but I wouldn’t be surprised to see someone put a pile of palta (avocado paste) on one. (Although I haven’t seen this done, it sure sounds delicious. And yes, I know avocado isn’t a vegetable! But it’s green so we’ll count it.)

Where Does the Barros Luco Sandwich Name Come From?

Ramón Barros Luco was president of Chile from 1910 to 1915. He frequented the Union Club where he’d always ask for a steak sandwich with cheese. Thus people started asking for a “Barros Luco” sandwich.
Surprisingly, he is now most well known for the sandwich and not his actual presidency.
The next time you’re in the mood for a good sandwich, ask for the Barros Luco. Yes, you’ll need to roll your double letter ‘r,’ but the food is great and will be worth the effort. Your taste buds will thank your mouth for the effort!
Have you had a Barros Luco? Where did you have the best one you’ve ever tasted?
Picture by ffuentes