Home » Why Chile Claims Part of Antarctica as Chilean Territory

One of the thing that surprised me during my stay in Chile was that the news would show the weather forecast for Antarctica.
The reason for this is that Chile claims a piece of Antarctica as Chilean territory. So naturally, they would report the weather for it just as they would any other part of the country.

The Chilean Antarctic Territory covers 1,236,000 km² and stretches south of the 60th parallel down to the South Pole. 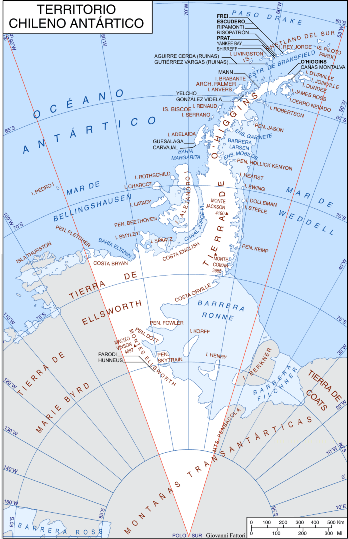 Chile has a permanent village, Villa Las Estrellas, which averages about 100 residents year around. This village has a church, school, post office, and bank, among other services.

History of the Claim

Wikipedia offers an interesting insight into why Chile holds firm to its claim:

According to the Chilean argument, its claim to the Antártica Chilena Province is as old as Chile itself. The Tordesilhas Line established a west/east division of colonial territories between Portugal and Spain. On the first organization of the new conquered territories, Charles V, ruler of the Spanish Empire assigned to Pedro Sancho de la Hoz control over Terra Australis, which included the Southern part of South America, Tierra del Fuego Archipelago, and all southern undiscovered territories (Terra Australis Ignota). This gobernation eventually merged with other territories in the Captaincy General of Chile.

Chile’s Antarctic claim is disputed by many international countries, some of which also claim parts of Antarctica.
Chile was an original signer of the Antarctic Treaty establishing international standards for regulating Antarctica.