The national dance of Chile is called the Cueca. This dance has rich historical roots in both African and Native American cultures. Even though Chileans have been dancing the Cueca for years, it wasn’t declared the official dance of Chile until September 1979.

The Cueca is a parody of the courtship of a chicken and rooster. The dancers wave handkerchiefs above their heads during the dance. These handkerchiefs can symbolize the feathers of the bird or the rooster’s comb. 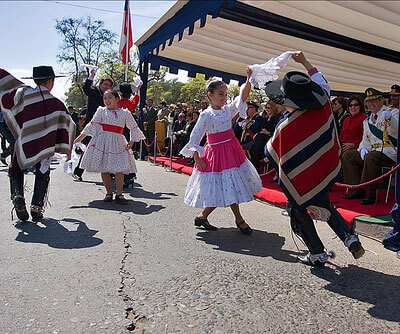 The choreography (movements) of the Cueca consists of circles, moving in semicircles back and forth (known as half moons), and turning towards the partner and then away.

The dance happens in an imaginary circle, with the man in one half, and the woman in the other. It starts with a promenade where the man invites the woman to join him by offering his arm. This is done while instrumental entry music is played. The couples stand facing each other about three meters apart. Before the song begins, the couple claps their hands in rhythm of the music.

Movements and Steps of the Cueca

You can learn the steps of the dance from the following pages. These are in Spanish but have diagrams outlining the movements:

Those that really know how to dance the Cueca will dress up in traditional Chilean clothing when they dance. This is particularly true during the independence day celebrations every September. The men wear a Chilean cowboy hat, shirt, flannel poncho, riding pants, short jacket, riding boots, and spurs. Women wear a flowered dress with an apron. Here is a video of a school’s Cueca competition that shows the traditional clothing the dancers wear:

Dancing Around the World

To celebrate Chile’s independence, many Chileans will dance the Cueca even though they are far from home. Here is a video of some Chileans dancing the Cueca in Norway:

There are many variations of the Cueca. A very modern and urban form is called the Cueca Brava. In the following video you can see that it has a very different style from the more traditional one shown previously: