Buried under the ground near Chile’s presidential palace, La Moneda, is a cultural treasure you’ll want to visit. The Centro Cultural Palacio la Moneda or Cultural Center Museum is an underground facility located under an open plaza just south of the presidential palace.
This modern museum was finished and opened its doors in 2006 and is one of many museums you can visit in Santiago. 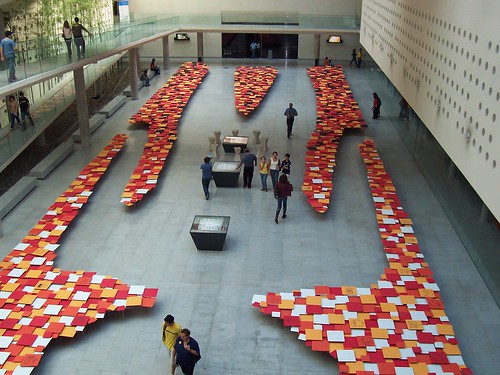 What’s in the Museum

The museum features a series of rotating exhibits. These often include a mixture of Chilean, Latin American, or worldwide cultural exhibits. If you are interested purely in Chilean culture, be sure to check out the current exhibit list before visiting to see if they interest you.

There are two levels to the museum with various small and large exhibit halls. You’ll be able to wander around some areas without paying, but the primary exhibits will require admission.

The Cultural Center is home to the Chilean National Film Archive, which features classic Chilean films and some from around the world.

How to Get There

While there is private parking available, the best way to get to the museum would be to take the Metro, Santiago’s subway system. Get off at the La Moneda station and the museum is about a block away.

Since the museum is located at the base of Chile’s Presidential Palace, take the time to walk around La Moneda. If you’re lucky, you’ll be able to look into the spacious interior courtyards or see the changing of the presidential guard.

General admission tickets to the museum cost $1000 pesos or about $2 USD. Discounts are available for senior citizens. Kids under five are free.

You can find information about exhibits, hours, and admission prices on the official site (available in English):
http://www.ccplm.cl/sitio/en/.