Fantasilandia is an amusement park in the heart of Santiago, Chile. Established in 1978, it has slowly evolved over time from its initial eight attractions to a broad collection of rides, games, and attractions that you’d likely see at amusement parks around the world. 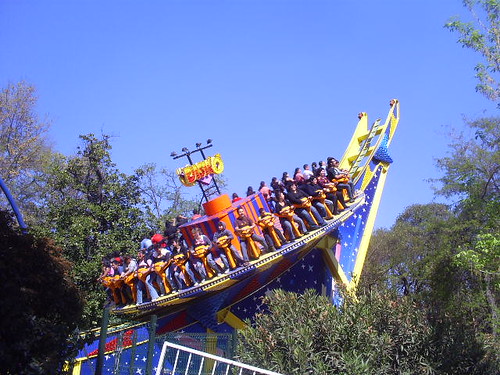 The name Fantasilandia is derived from the combination of two parts: Fantasi, comes from fantasía, meaning fantasy.
The -landia ending is one commonly used by Chileans to mean “the land of”. One of my favorite uses of this term is that of describing the United States as Gringolandia or “Land of the Gringo.”

Fantasilandia is located in Santiago’s second largest public park, Parque O’Higgins, in the center of the capital city. You can easily get to the park via the Autopista Central (Central Highway) or the Parque O´Higgins stop on the Santiago Metro subway.

Fantasilandia is typically open on all school and public holidays and during summer vacation (December – February). The rest of the year, the park is open only on weekends.

What to do at Fantasilandia

Fantasilandia has a good mix of rides for the whole family. The park groups its attractions into these categories: family rides, kids zone, adrenaline rides, terror, paid rides, and competition games. As you can imagine these are the typical types of games and rides you’d see at other amusement parks.
Adrenaline rides include large and modern roller coasters.
Terror attractions include haunted house-type experiences and even a “Pirates of the Caribbean” ride.
Competition games are a good way to win that large stuffed animal or simply try to impress your friends. Be prepared to pay extra for these types of games.

How Much does Fantasilandia Cost?

Fantasilandia has a website that is up to date with schedule, pricing, and attraction information. For more information about the park, visit:
www.fantasilandia.cl (site is in Spanish).
Picture by Violeta Z