Home » In Chile, You Better Know Your Tuna

One of the joys of Spanish is false cognates. These are Spanish words that look like an English word and so lead you to believe they are the same when, in fact, they are different.

Tuna is a prime example of a false cognate.

Tuna – from a Plant

The Spanish word tuna represents the fruit of the prickly pear cactus. In Chile, tuna is a common fruit and you’ll find it in the feria markets and even the breakfast buffet of your hotel. 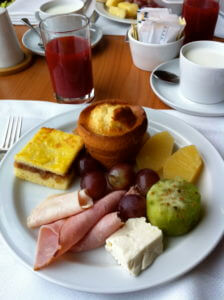 The fruit tastes like honeydew melon but has a bunch of seeds. The seeds are edible so don’t think you need to spit them all out like watermelon.
If you want the melon-like fruit, ask for tuna.

Atún – from the Sea

You’ll also find tuna fish on the menu and even the open-air seafood markets. In Chile and many other Spanish-speaking countries, tuna fish is called atún.
So if you want the fish, ask for atún.