Home » The Change from Escudo to Chilean Peso

Matias writes with this question:

I need to find out why the currency changed in Chile from the Escudo to the Chilean Peso in 1975.

According to the Banco Central de Chile (in Spanish): 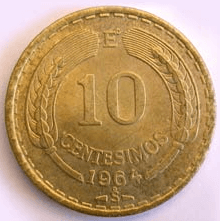 Law #13.305 in 1959 replaced the peso with the escudo as the monetary unit starting January 1, 1960. A later law in March 1960 put forth that the bills should express their value in escudos, centésimos and half centésimo and display Chile’s national seal.

In 1975 the peso was once again established as Chile’s monetary unit. According to the law #1.123, on August 4, 1975, starting on September 29th of that same year, the monetary unit of Chile was once again declared the official currency of the country. On that date, you could exchange one thousand escudos for one peso.

According to this history (in Spanish), the change from the escudo to the peso was also made to fight inflation, or at least reduce the appearance of its effects.