Great Chilean food calls for some classic and traditional Chilean recipes. You don’t have to be a mamita who has been cooking in a Chilean kitchen for years to make some delicious recipes. 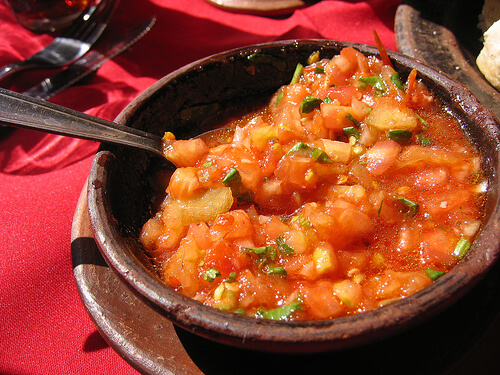 Here are some of my favorite traditional Chilean recipes:

Chilean Pebre is the ubiquitous condiment you’ll find with many Chilean meals. The simple ingredients make this an easy traditional Chilean recipe to accompany your meal:
Chilean Pebre Salsa Recipe

Empandas are some of my favorite Chilean foods. Cheese empanadas are typically fried and have a very short ingredient list. The challenge is making the dough for the pasty shell. This recipe helps speed up the process by finding pre-made shells:
Easy Cheese Empanda Recipe

When corn is in season, humitas are a favorite Chilean recipe that do require some work but they taste great:
Chilean Humitas Recipe

Chileans have a sweet tooth. Manjar, a brown caramel-like sweet paste is a favorite on bread or desserts. You can make your own manjar with a can of sweetened condensed milk:
Manjar Recipes

If you’ve got tomatoes and onions, you’ve got most of what you need for the classic ensalada chilena that can accompany any lunch or dinner meal:
Chilean Salad Recipe

Combine French style crepes and Chilean manjar and you’ve got a very rich (and delicious) treat that is equally great for breakfast or dessert:
Chilean Panqueques Recipe

What’s One of Your Favorite Traditional Chilean Recipes?

I’ve only listed a few traditional Chilean recipes here. What are some of your favorites? Do you have a great recipe you’d like to share? If so, please leave a comment.
Photo by Ryan Greenberg