During my time in Santiago, I loved riding the yellow buses called micros. These always lead to interesting adventures. The old micro system is transforming itself into a new modern and more efficient public transportation system called Transantiago.

Old micro bus routes often overlapped and caused extra traffic. Transantiago is founded on a more efficient system for passenger flow through the arteries of the city. Main routes are established throughout the city that take people between major areas. Smaller circulatory routes take people to/from their neighborhoods to major routes where they can transfer buses. Bus routes are designed to efficiently take people to nearby metro stations. 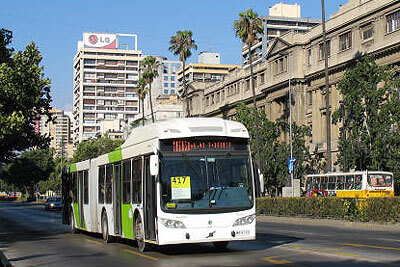 Transantiago is replacing the infamous and colorful yellow micros with modern Volvo buses. Many of these new buses are articulated meaning they have an accordion style connector in the middle that allows for a longer, higher capacity bus. These new buses have drastically reduced emissions over their predecessors. These Volvo buses can also carry more people and thus increase passenger throughput. You can see the various buses to be used in Transantiago on their site.

Transantiago aims to improve safety in public transit by eliminating two main culprits of unsafe buses. In the wild days of the yellow micros, drivers were often paid by commission and would frequently race each other to pick up passengers. The races lead to accidents and endangered passengers. Another danger was overloaded buses where people road in open doorways, barely holding on (I did this once or twice. What an adventure!) 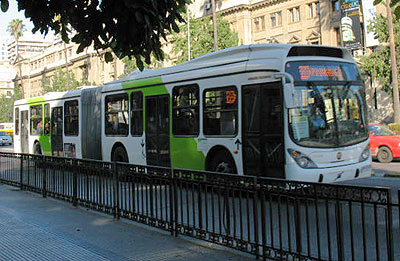 Transantiago will have a multiple fare structure:
A local fare will permit trips inside a local area and allow free transfers between local services in that area.
A main fare will be slightly higher and will allow trips on both the main bus lines and metro (including free transfers).
A transfer fare will have to be paid when transferring between the main bus service (or metro) and a local service. The cost is greatly reduced compared to the basic fares.
Student fares will run 35% of regular price.
Multivía, a contactless smartcard previously used by the metro is Transantiago’s principle payment method. The Multivía prepaid card allows passengers to pay for both buses and the metro. The electronic system monitoring payments will discount transfers as appropriate since it will be able to track passenger travels.

You can read more about Transantiago: